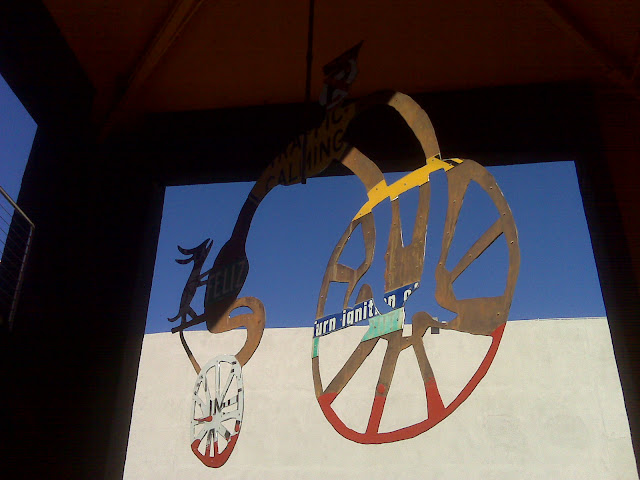 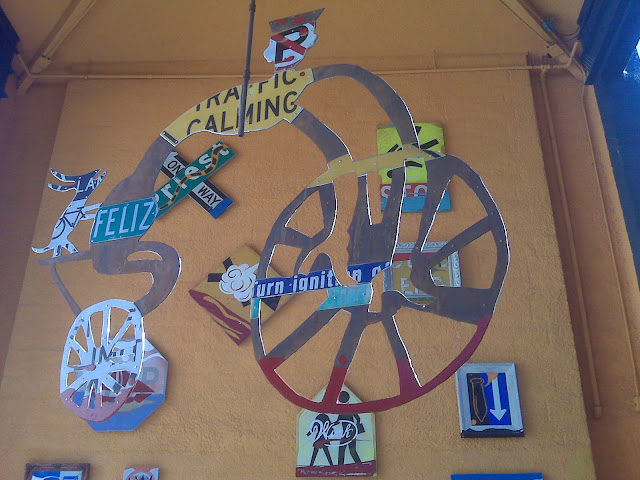 The standard usage of "anthropomorphism" is the attribution of human features or characteristics to non-human creatures or things. To cut to the chase, I don't think becoming one with your bicycle qualifies, strictly speaking, as anthropomorphism. The term is usually used to describe an error, or mistake. My brother-in-law dislikes cats, and thinks that any emotion or thought that we attribute to ours ("They love us. They miss us. The cats understand many things we say.") is anthropomorphism. On the other hand, "My cat is hungry," doesn't seem to me to be anthropomorphism, if we only mean that there is some sort of sensation that it needs to eat. Even that's tricky, though, because we don't usually mean only that when we say that we are hungry, we also mean that we are thinking or scheming about what we're going to eat, who we are going to eat it with, and probably a whole memory-association complex of past experiences tied to the intended meal. I'm not sure a cat would have all that stuff in its head, too, and that would probably be anthropomorphism to think that it does. "My cat loves tuna," is right over the line. As a side note, I would love to see a domestic cat try to take down a tuna in the wild some time, but that's a different post.

Since the link and the page would seem to indicate they don't necessarily persist the descriptive text after the exhibit is gone, I will go ahead and quote at length from the Scottsdale Public Art page, with the thought that this post will still make sense in a few months, and not point to a dead or different link. From the current exhibit page of Cycle 2 of Belle Art: "A new form, a cyclist who becomes one with the bike, joyfully revolves amongst altered signs on the orange wall. Made with re-Cycled (pun intended) traffic signs salvaged from the Scottsdale Transportation Department, the signs and symbols are both ambiguous and familiar. The iconic folk art style of the forms and the imagery of re-imagined bicycles and signs touch on social dexterity and creativity as a means of crossing boundaries. Taken as a group the images take on the sense of a day dream, of a blue sky ride...The artist also recently completed other anthropomorphic bicyclist sculptures for traffic calming roundabouts near downtown Tempe, at the intersections of Wilson and Howe streets, and Roosevelt and 11th streets."


Attributing to my bicycle, in a non-figurative manner, human characteristics, for example, giving in a woman's name and caressing it gently because it is sensitive, responsive, and beautiful, is anthropomorphism. Becoming one with a bicycle, as a human-bike system of flesh and steel where man and machine function seamlessly and without thought or extra effort, is what happens when one of the most efficient machines ever invented is ridden by someone who has a lot of practice. It is a form of finely-tuned kinesthesia, almost an extended proprioception that envelopes the parts and machinery of the bike. Almost. But excellent technique plus ergonomics does not equal anthropomorphism. And I choose to believe that John Randall Nelson is aware of that.

Take another look at the title: Anthropomorphic Bicyclist. It suggests that the rider in the sculpture has this trait. I can accept that; once you have ridden your machine for a while, it almost seems natural to begin to attribute some human characteristics to it: moods, physical attributes, spirit, a remembered history, spunk, speed, power, will, grace, etc. Many of us are anthropomorphic bicyclists. I think this typically involves projecting onto the machine characteristics of its own, though, and not suggesting that it is physically or actually melting together with its rider, its fork becoming arms (or legs), parts of the frame becoming flesh and blood and bones, while the dog rides on the rear rack barking at the weird transformation. That would not be anthropomorphism. It would be magic.

When I feel like I have found the magical element in a work of art, I am convinced I have come close to its message, intended or not. Imagine the rider in this kinetic weathervane calling his bike "Stella" and thinking that "she" is smooth, supple, quick, or whatever. He is missing the point. He is overlooking the magic as he actually becomes one with the machine. What if we stopped naming everything, including the bike, and just rode it? Oh, I do like that, being reminded of what may have been overlooked. I have to find out if John Randall Nelson is a bicyclist. If so, perhaps one night, bombing through the darkness, he saw past the anthropomorphism, beyond the naming of things and the projecting onto them of our own peculiarities, and glimpsed the magic of physical oneness with the machine. Cool. Looks like I will be headed down to Tempe, to Wilson and Howe streets, and Roosevelt and 11th streets, to see some more John Randall Nelson anthropomorphic bicyclist sculptures. Just remember: it's the bicyclist who is anthropomorphic, and not the sculpture. The sculpture is a depiction of magic. Fuzzy cell phone video below. Get up. Go ride.

Posted by John Romeo Alpha at 5:29 AM