If Everything Goes According to Plan 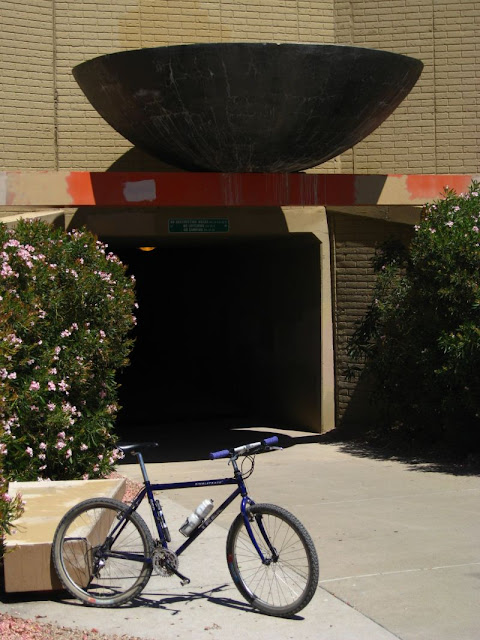 Part of Wall Cycle to Ocotillo by Mags Harries and Lajos Héder
The first wish of many artists, I would guess, would be for their work to be embraced warmly by an adoring public. When Wall Cycle to Ocotillo first appeared back in 1992, though, the pots along the freeway were not universally praised, accepted, or understood. They became a target for people who felt then (and probably still feel) that public art projects are a waste of public money. The "Squaw Peak Pots," as they were nicknamed, were reviled in the press, particularly the main local paper, although in searching I can't seem to find articles or opinion pieces from those days. For the record, which I think will be searchable for a while at least, I loved this work from the start. One of the main reasons I stopped reading the local newspaper was the unforgivable know-nothing attitude they displayed as they stirred people up about this. It went on for quite a while, and set back Phoenix public art for years. While other cities, like Scottsdale for example, pushed forward with bold programs to make public spaces less ugly, Phoenix was jammed up with memories of the Squaw Peak Pots. Thanks, Arizona Republic! Dozens of horribly ugly and alienating miles of freeway thank you! (while Phoenix was still fretting about freeway pots, Scottsdale did this, part of which adorns my blog header).

We want more Zwak! More Grygutis! More Harries and Héder! H&H also designed the gorgeous Arizona Falls, by the way. Take that, worthless philistine newspaper! Not to kick a man when he's down--I'm sure the Internet will complete soon enough the work that good taste could not accomplish.

If artists don't get their first wish and their work is not adored, I guess, most of them probably would quietly acknowledge a distant second wish for lots of negative press, which has its own advantages. It's still publicity, and people are talking about your art.

The first few times I saw this work driving along the freeway, another pot-like object would suddenly appear perched atop the noise wall, breaking up the monotony of miles of otherwise boring concrete. I remember thinking that they should have put up more pots, because they seemed too few and far between. Some neighborhood wag put an actual toilet on top of the wall, which I also happened to see, in protest I suppose, but also inadvertently proving a point: evidence of human existence, individuality, and expression is sorely needed in such a place, to lend some kind of significance to the otherwise insignificant, isolated experience of driving in a car on a freeway through the hot tunnel formed by towering, blank noise walls. Take a look at the piece pictured above. It adorns a tunnel that is not on a highly traveled path, but which merely joins two neighborhoods which had been one before they were cut apart by the freeway.

You can't really cure a freeway wounding a cityscape, but you can make it less painful. OK you could mount cameras facing one direction and put huge flat panel monitors all along the other side showing the camera view, making the freeway effectively invisible, but that may not be feasible at this time. 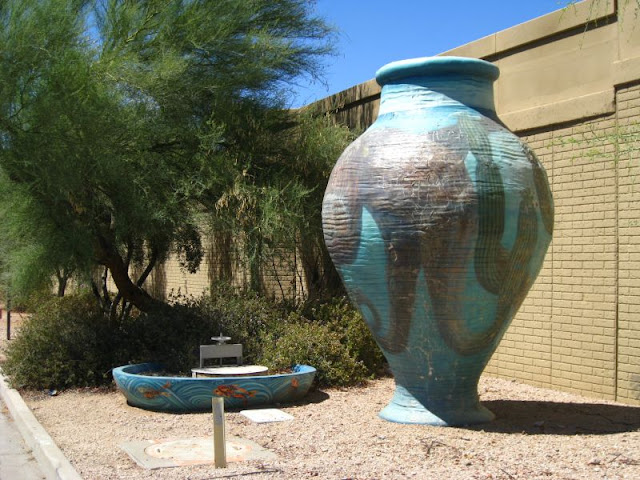 Octo-pot
This blue one reminds me of the Sea of Cortez, the closest ocean to Phoenix, and features an octopus with tentacles that morph into cactii arms. "Well sheeeeeit," said the newspaper pundits, "That don't make no sense. Y'all taxpayers got ripped off. Ain't no octopus I never seen with no cactus arms. Getcher pitchforks out. Let's go gettem!" Pro tip: the local newspaper is great for cleaning up spills in the garage, the cat litter box, or the bird cage. My neighbor raises pigeons, so I just rerouted the remainder of my subscription his way. The birds made great use of it. 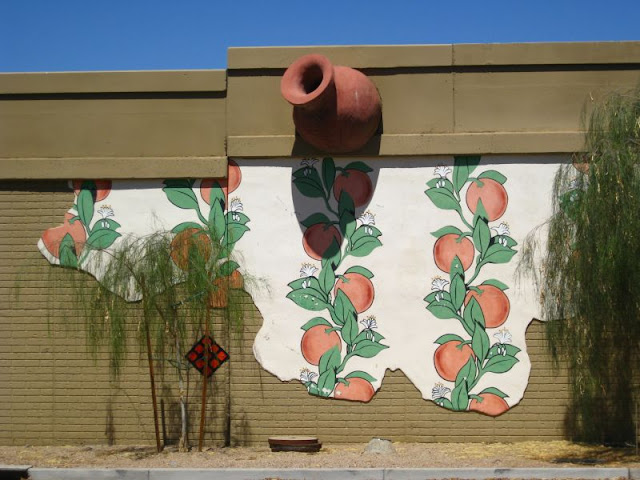 Fruit of Unknown Type
I've only pictured a few of the non-car-facing pieces of this work, the bicycle, or pedestrian-facing ones. According to the designers' web site, above, I should also note that "Acoustic Vessels along the canals have evaporative cooling over the benches and solar-powered interior water systems that create water sounds." As regular visitors to this blog probably know, I spend too much of my time riding along the canals, passing by several of the canal-side vessels, but have yet to notice one either cooling or making water sounds. Maybe the real water sounds coming from the canal are drowning out the fake water sounds coming from the vessels? More probably the cooling and sounding mechanisms did not survive the rigors of canalside existence. Although, there are a few vessels that I haven't visited for any length of time to see if they emit coolness, or water sounds. If you happen to know of examples which still do, please let me know. If they emitted REALLY LOUD water sounds, and/or were evaporative coolers of an extremely effective design, they might rank in the same level as The Pushbutton Horseshoe Fountain, one of my all-time favorites, a work of such overwhelming public art awesomeness that I'm sure it causes the critics at the soon-to-be-replaced-by-the-Internet newspaper to feel nauseous. 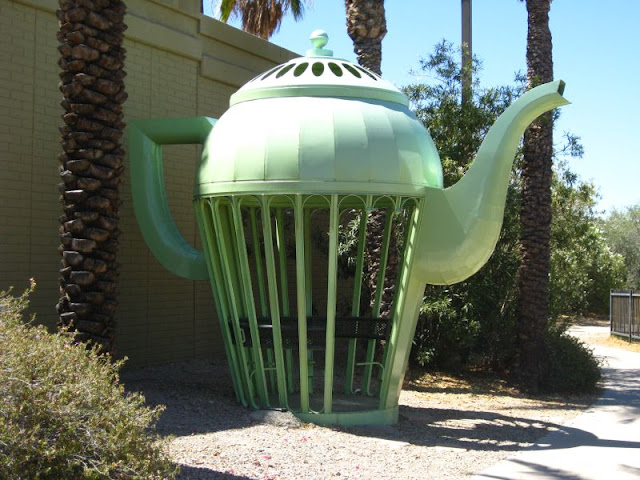 The Currently De-benched Coffee Pot Bench
I love features that decorate our urban landscapes and rescue them from what seems to be their natural overwhelming ugliness. It's easier to ride happy if it doesn't feel like you are riding through a bleak, bombed out, totalitarian cityscape. I rode in North China industrial cities before they got all fat and plastic and neon on exports, so I know my bleak totalitarian cityscapes. I prefer riding happy, and spreading that feeling around. Over on bikeskirt this morning, I posted a response which summarizes my thoughts:
I think we need the fast reaction time of our more primitive faculties to survive in traffic. The challenge comes from separating them from the emotional reactions that surface up with them–anger, frustration, middle fingers, yelling, throwing U-locks. It’s very possible to control those and then ride happy, because that added baggage is all internal to us, and we can learn to govern ourselves so that we are not hair-trigger bags of anger and pent-up violence. If we seek that in other people, we should foster it in ourselves first. We need to nurture our better sides while also reacting near-instantly to threats.
I'm punching out of the blogsphere for a few days, to take a trip with the family. If everything goes according to plan, we'll make our connections, I'll drive a rental car for miles and miles, buy a few books, and maybe bicycle and take a few pictures in different places we visit, come back here and show you some of them.

But when does everything ever go according to plan? Thunderstorms, flat tires, delayed flights, missed appointments, late meet-ups, food poisoning, these are the things vacations are made of. But, since I expect and plan for hiccups, I don't see any reason to give my vacation the finger. In fact, the unexpected is part of the adventure.

The unexpected is the adventure. Maybe you'll see me on the road somewhere: a long stretch of asphalt, and a lone rider taking his time, seeking the unexpected out there. John Romeo Alpha, the smiling cyclist. Peace. Get up. Go ride.

Posted by John Romeo Alpha at 5:02 AM