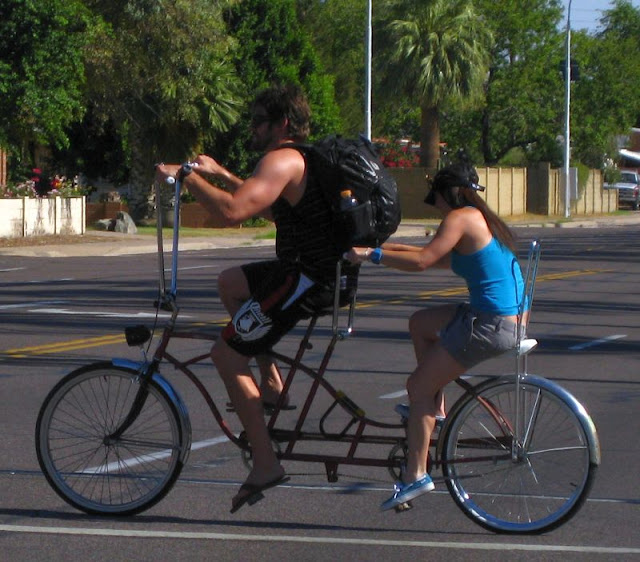 You'll Never Ride Alone
Rantwick saw an interesting grafitto on his ride which inspired him to produce a reflective post, complete with videos, on trying out nihilism on two wheels. I would go beyond the pragmatic effectiveness of love over nihilism when cycling, and suggest that a sustaining a nihilistic outlook while riding a bike would prove very difficult, at least if you live somewhere other than one of the cold, dark, northern European cities that gave birth to, and nurtured like a sickly yet beloved child, the nihilistic philosophical outlook.
I do think, though, that right after overcoming nihilism (there's also a 12-step program, step 1: first admit that you have a you), it would be quite natural to lapse into bicycle solipsism, the philosophical idea that one's own bicycle, and the thoughts one has while riding it, are the only things certain to exist. I and my two-wheeled machine are the center and essence of reality; all else is fleeting, shadowy, inessential, illusory, and unreal.
The path beyond bicycle solipsism may be represented by the tandem. You're riding along, the world flashing by, and you realize, right behind you, is an other. The other is spinning along with you, seeing most of the same things you see, and the feet of the other are magically staying in sync with yours as they go round and round. Yet, the other is within the bubble of reality which surrounds engulfs and sustains you and your machine. The other, stuck there behind your backpack and sitting on a banana seat of her own also connected to your machine, and also supplying part of the locomotive force which is propelling your machine, must also be real. Your bicycle solipsism fails, collapses into a heap of rusty lemmas, and you move on to bigger and better things. Together. Get up. Go ride.
Posted by John Romeo Alpha at 9:21 PM