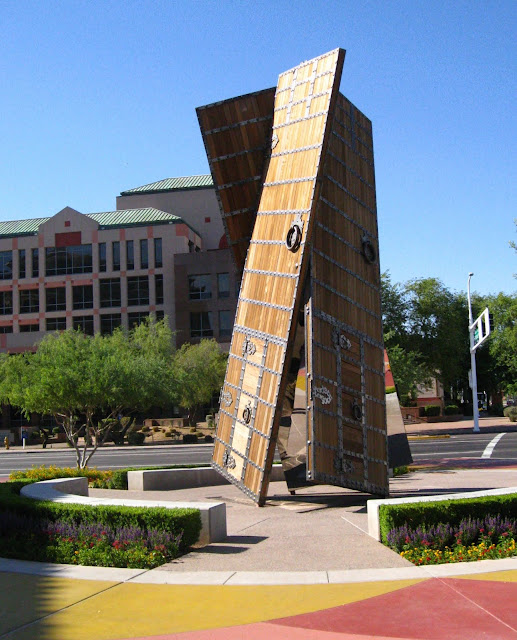 The Doors by Donald Lipsky / Sound Passage by Jim Green
While shopping at the grocery store last night, I felt myself drawn inexplicably to the closeout DVD rack, where for $6.99 you can buy DVDs that no one else wants. Old Westerns, some bad Sci-Fi, flicks that don't even aspire to B-grade, the castoff remnants of unfunny comedies. As I cast my derisive, highly critical glance across the tattered flotsam of popular culture, my glaze settled appreciatively on a surprise: Run Lola Run was tucked among the rest. What? Clearly, in addition to believing that my fellow grocery shoppers had so little taste that they would shell out their hard-earned $6.99 to acquire yet more crap made by former Saturday Night Live denizens, the person or persons who stock the shelf had no clue what a fine film they were relegating to the crap rack. Oh well, my gain. Into the basket with you, my crimson-haired track star!

I possessed a borrowed copy of Lola for almost a year, I think. I might have held onto it a little longer than the lender had in mind. This is not not a review of the movie. The movie doesn't require a review. If you've never seen it, and you agree that former SNL denizens should (the vast majority anyway) be seeking careers other than serving as extras in bad movies made by other SNL denizens, just go watch it. Twenty-three year old Franka Potente is poetry in motion. She makes one tiny choice at the beginning of a twenty minute-long sequence three times, with three different results. It's an ever-forking maze of consequences navigated at high speed on foot by a fit young woman with brilliant red hair. She runs down a very similar path, sees the same people, faces the same challenges, but small choices and delays, we're talking just seconds, microscopic misses, brief conjunctions or lack thereof, lead domino-style to new discoveries, (mis)fortune, life in one form, death in another, extremely unpredictable and in some ways disorienting: if you believe you're in control, think again.

Which caused me, one domino to another, to deviate from my normal, not-very-direct commute route, to make a stop at the sculpture that stands on the corner of Scottsdale and Camelback Roads. The Doors by Donald Lipsky is what you see from the outside, then when you step inside you also hear the sound stylings of Sound Passage by Jim Green. As you can see in the photo above, it's a slightly tilted assemblage of some really big doors. The inner surface of the doors is mirrored, and top is open a bit, so it is like being inside of a kaleidoscope. You can get a much better idea by watching this short clip I took.

My commute is not the most direct route from A to B, and I don't ride it fast, measure the elapsed time or distance precisely, or meter my cadence. There are more direct routes, and I could ride it much faster, on one of my speedier bicycles, in more suitable attire. I'm not commuting on my bicycle to get there fast, but rather, in search of a better experience. I've come to value my time on the bicycle for thinking, dreaming, observing, listening, being. Slow and indirect is my choice. I'm sure I don't know the consequences of that choice. But so far, looking back, I like them. 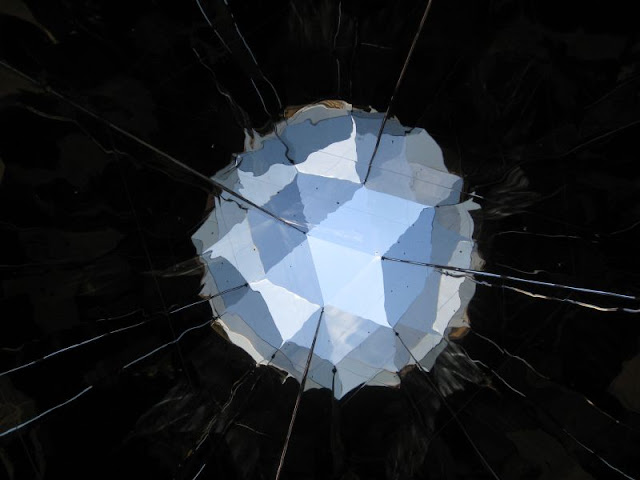 Through an oculus darkly 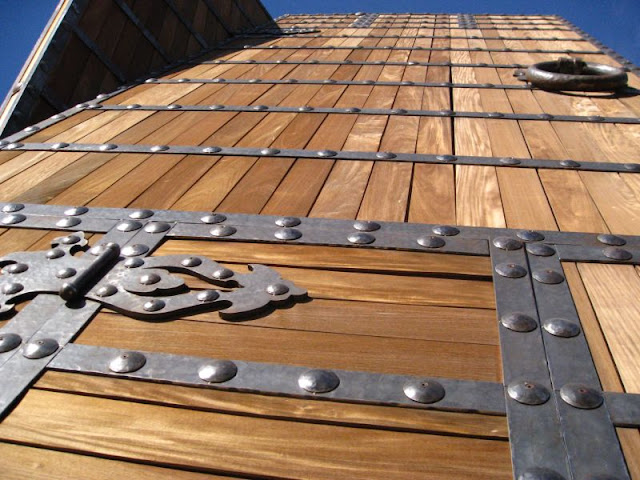 Is that an inner door?
It all hinges on..well, we don't actually know, do we? Not ahead of time, anyway. Afterward we can look back and apply our faulty reasoning, our gambler's fallacies, our eager pattern matching, and wishful thinking, but in one moment we don't know what our fate will be in the next, and that's a fact. Stare into that naked singularity for a second, and you may glimpse the abyss. I think when you're younger and your neurons are all exploding with the heady glory of new knowledge, Sartre might seem like a reliable host to serve the philosophical hors d'oeuvres at that party. Then years go by, you gain some experience, some perspective, and you start to feel like the other side of the instant roulette wheel of fate is the ever-turning steamroller of sameness flattening what was supposed to have been your life into the blank black pavement of oblivion. Between those two extremes, we have feelings, we make plans, we form relationships, we live. No big answers to wrap this up, then, but I do have suggestions: take a winding route, consider not going directly from A to B as fast as you can, open the doors and look into the kaleidoscope, put yourself in the other guy's shoes, be gentle because you never know what's next, but a different now that you shape yourself can be interesting. Get up. Go ride.