I mark in every face I meet 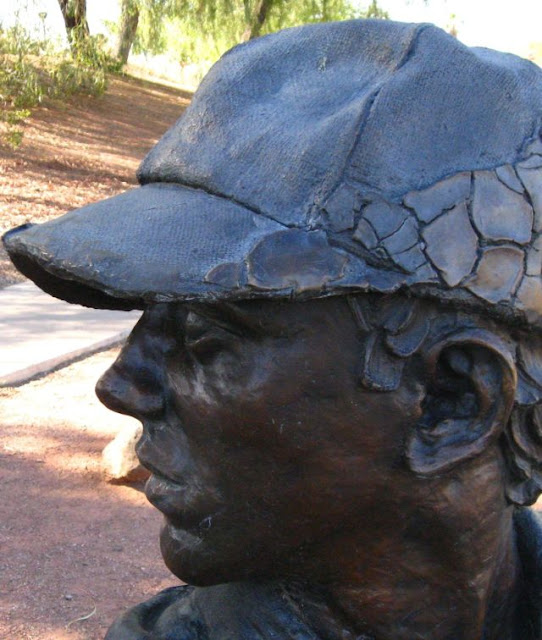 While photographing this sculpture, sitting on the grass in the park, two small dogs on leashes came over to me tentatively. They were sniffing, trying to figure me out. I smiled, they started wagging their tails, and we were fast friends. They weren't jumpy/licky/yappy guys, just friendly furballs looking for some petting. Instant telegraphic emotional connection.
Once, accelerating up a double-lane freeway ramp during morning rush hour back when I used to commute by car,  the car just in front of me jerked violently to the right, avoiding something in the road. I instinctively followed his lead, and saw that it was a small dog, paralyzed with fear, trembling, stuck in place, looking right into the face of every driver pleading for help. I'll never forget his face because I knew exactly what he felt and there was nothing I could do about it. Instant telegraphic emotional connection.
When I came upon this statue, though, at first it wasn't saying much, possibly because I couldn't see its face. 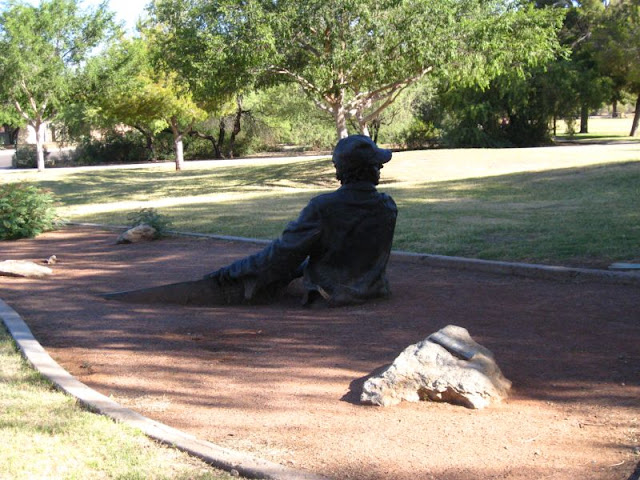 On First View
Silent. Yes, large in scale, and nicely crusted with bronze mud simulacra. Intriguing, with the boat and a guy in the dirt, near a small lake just on the other side of that berm to the right (though he's not quite looking that direction), but I still didn't connect with it. OK, go check it out, take some shots, stick Bip in the picture for scale, see what it looks like from other angles. 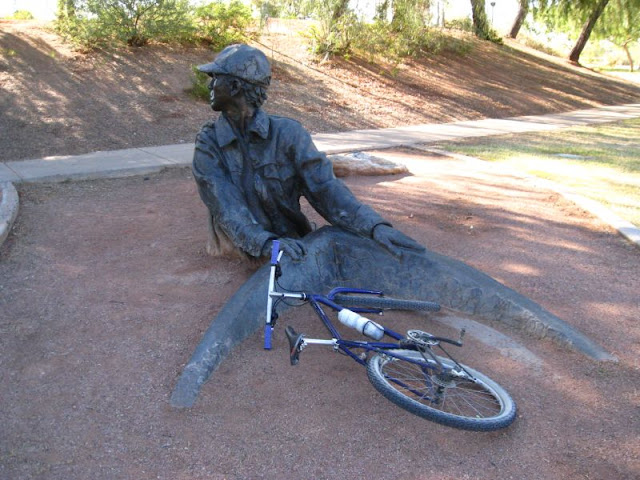 Mountain Bike in the Boat for Scale 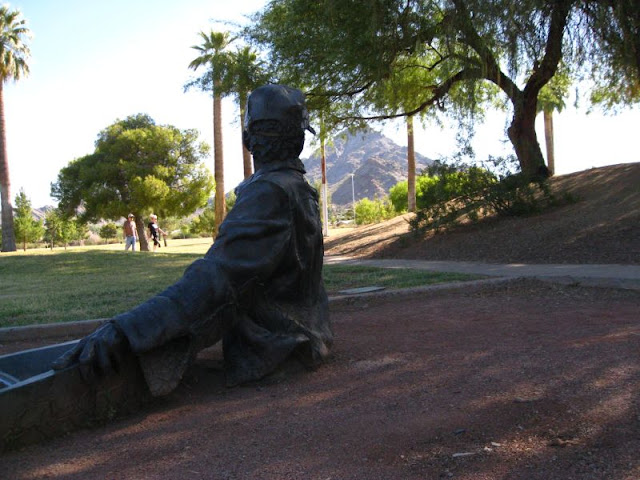 This Shot Did It

Instant telegraphic emotional connection. He's not really tugging on the boat, is he? Although the information I had read mentioned him pulling a boat through the desert, I'm not so sure. From this angle, it's more of a stationary grasp, a pause having just noticed something. I haven't read the John Hersey novel A Single Pebble which has a main character also called The Tracker, but I did find that he's an engineer traveling up the Yangtze River, experiencing that discombulating forced constant rethink called "Culture Shock" from being dumped headlong into China. I felt like that for a period of time. And I stood in this spot by the statue, I noticed he's looking toward Piestewa Peak. One second before, he's been pulling this boat through muddy shallows for who knows how long. Then he turns. Next thought: this boat ain't going up there, no use trying, and no reason to try. Next thought: I bet you could see a lot from up there. Possibly whatever it is he's looking for.
He could just drop the boat right here and hop on my bike to get over there. Except that he's bronze and would crush my bike (I think 800 pounds is over its rated weight), but I guess at least it wouldn't fail explosively like a carbon fiber bike would. There's a good ramada to lock up the bike at the bottom of the peak, it's a quick ride from here, and a fun hike to the top. Pretty crowded, though. People would move out of the way for a ten-foot tall bronze guy hiking up the trail to get a better view of the surrounding area. Even if he smiled at them. Best smile back, and step aside. No words needed. Get up. Go ride.

Posted by John Romeo Alpha at 6:17 AM