The Ascent of a Woman 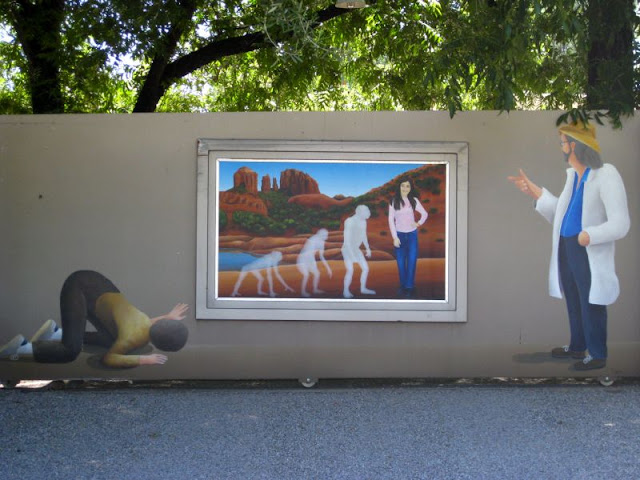 A whole new level
This is unexpected art on a gate on a driveway to a Very Big House that I saw while riding around to take pictures of some expected art. The landscape in the painting is of the red rocks (often capitalized: Red Rocks) of Sedona, Arizona's center for new age crystal vortex mind expansion, which also happens to offer some sweet hiking and mountain biking. The scientist-looking dude on the right is throwing a six-shooter and probably making the accompanying sound while occupying the "peak" or "pinnacle" of the ascent sequence, while the woman on the left simultaneously bends to straighten the picture and assumes the position of the initial, four-legged member of the sequence. Crooked pictures bug me even if intentional. Can't help it. Want to straighten it out. I guess that puts me down on the left end of the sequence. Would a four-legged creature be able to drive a 2x2 bicycle with front and rear cranks? If so, I would be OK at that end. Might let me enjoy powering up the hills around Sedona more. I think I would prefer that to being the six-shooter guy. Why? I suspect he was the one who hung the picture crooked. Get up. Go ride.
Posted by John Romeo Alpha at 6:36 AM