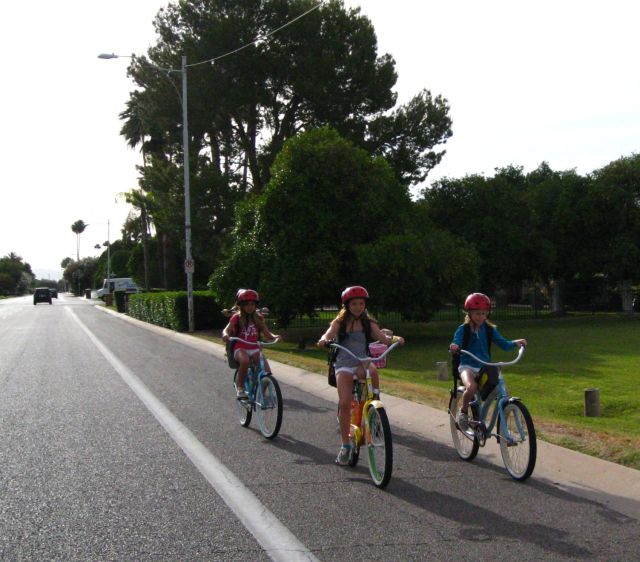 Imagine a path, or system of paths... In the book A Pattern Language, Towns, Buildings, Construction by Alexander, Ishikawa, and Silverstein, Pattern 57 is called Children in the City. This chapter begins by suggesting that children need to explore the world independently to learn about it as an essential component of the journey to adulthood, but recognizes that large modern cities are fraught with (real and perceived) dangers which limit this critical, independent exploration. Their approach to addressing this is built on the foundation of Pattern 56, Bike Paths and Racks (a JRA@OSG favorite, of course), and entails developing a subset of paths among the larger system of bike and pedestrian paths which are extra safe, extra fun, and yet offer as full access as possible to the different, key features of the city.  This path in their scheme is a separate bike path, away from cars, and protected from traffic and other threats. An excerpt is in order:

"And most important, the great beauty of this path is that it passes along and even through those functions and parts of a town which are normally out of reach: the place where newspapers are printed, the place where milk arrives from the countryside and is bottled, the pier, the garage where people make doors and windows, the alley behind restaurant row, the cemetery." -A Pattern Language, Pattern 57
I grew up in another time when we did all those things without special paths. I was curious about such things, and also the Farmers' Cooperative, the junkyard, and the College's Chemistry Lab that was being remodeled, but that's another story for another post. I learned volumes of self-directed knowledge while riding my bicycle around as a kid. Here and now, in Phoenix and other cities of similar size, and I gather in many even smaller cities and towns, Pattern 57's problem statement is very accurate, at least in the way that we parents feel that we must protect our children from the threats of the city by disallowing independent exploration. But imagine, if some of the ideas of Pattern 57 were implemented. I think of some of the awesome, child-oriented museums we've taken our kids to--Exploratorium in San Francisco, the Arizona Science Center, the Discovery Center Museum in Rockford, the Staten Island Children's Museum, Liberty Science Center, the Museum of Science and Industry in Chicago--and imagine educational "exhibits", except experienced in the actual world of the city, stretched out along a trail set up just for that purpose. Beneath an open sky. In the free air. Explored independently, on a bicycle. I don't know of a place where Pattern 57 has actually been implemented. Anyone seen something similar? Pattern 57: a place set aside for kids out bicycling in the world, safely expanding their inner worlds. Imagine. Get up. Go ride.
Posted by John Romeo Alpha at 7:47 PM