From the Round Earth's Imagined Corners 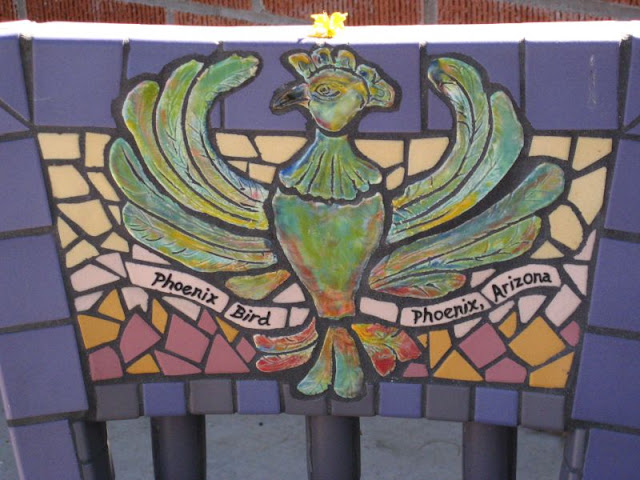 At the round earth's imagined corners blow
Your trumpets, angels, and arise, arise
From death, you numberless infinities
Of souls, and to your scattered bodies go,
All whom the flood did, and fire shall o'erthrow,
All whom war, dearth, age, agues, tyrannies,
Despair, law, chance hath slain, and you, whose eyes
Shall behold God, and never taste death's woe.
But let them sleep, Lord, and me mourn a space,
For, if above all these my sins abound,
'Tis late to ask abundance of Thy grace,
When we are there. Here on this lowly ground,
Teach me how to repent; for that's as good
As if Thou hadst seal'd my pardon with Thy blood. 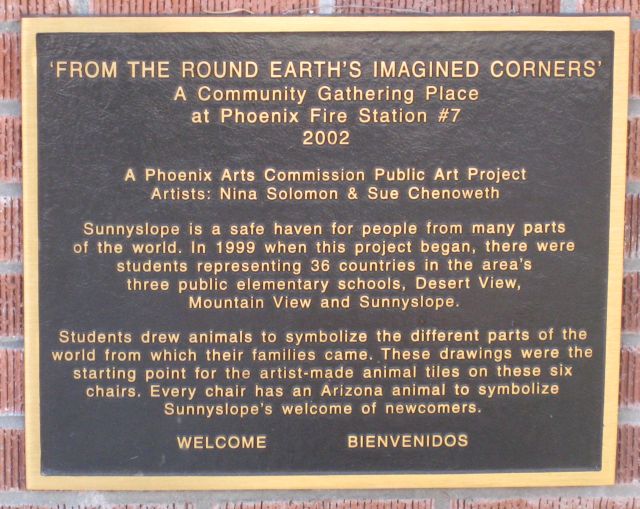 At, From, What's the Difference?
When I saw the title of this work by Nina Solomon and Sue Chenoweth, and tracked down its source, I tried to figure out the connection between a 400 year-old sonnet about Judgment Day (Happy 400th Anniversary, Holy Sonnets), and a community gathering place featuring chairs with animal tiles based on kids' drawings. I have some thoughts. First the art, though. This grouping of chairs is tucked into the side of Phoenix Fire Station #7 in Sunnyslope, just north of the John C. Lincoln hospital. It's in a shady spot with a low wall, which does look inviting enough to pause for a chat and a rest while strolling through the neighborhood. 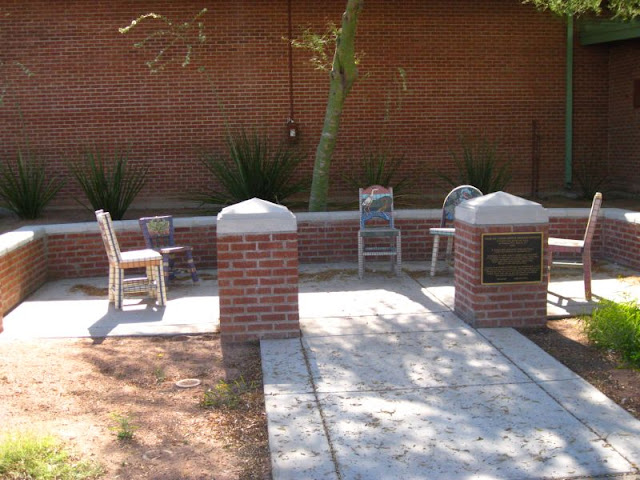 Bienvenidos!
You walk in and find a collection of different shapes and sizes of chairs, kind of informal-looking, relaxed, and intriguing with their tile animal decorations. 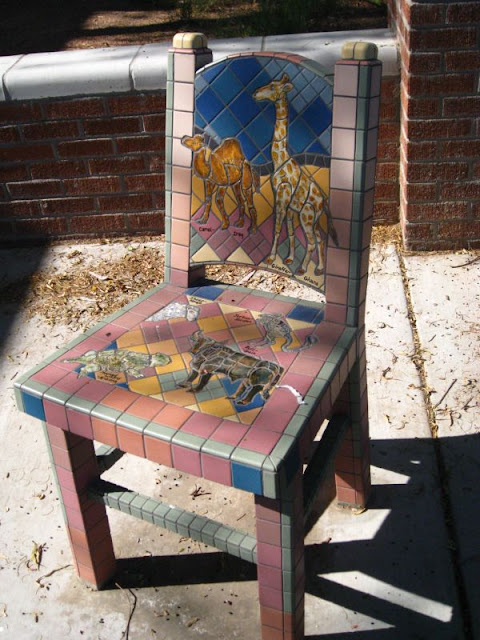 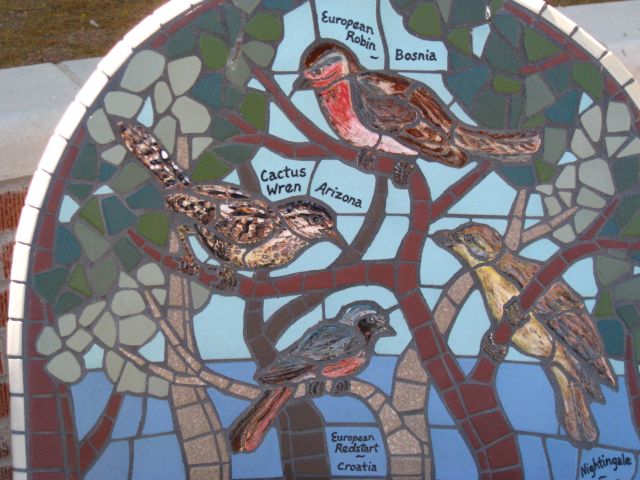 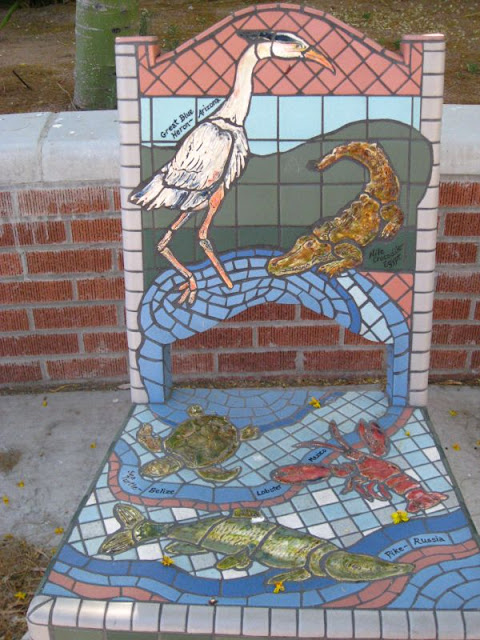 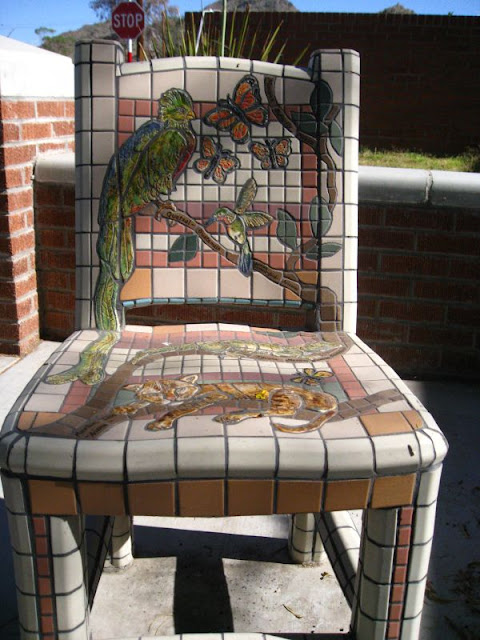 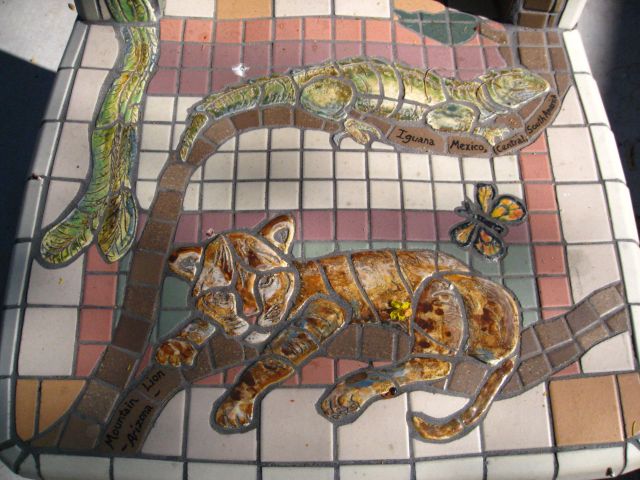 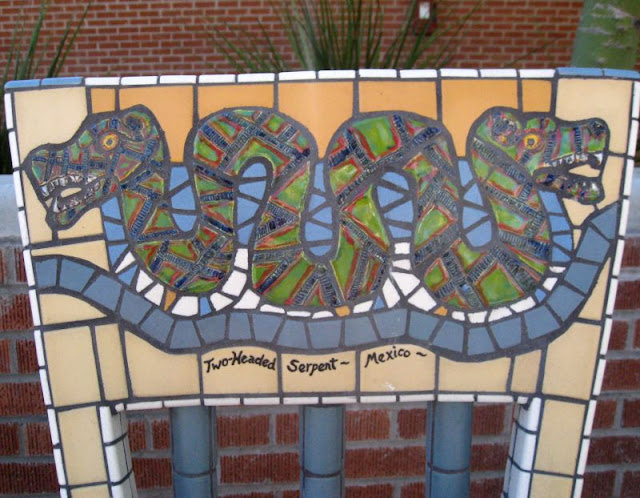 When he wrote the sonnets, Donne was apparently in a time of transition in his life, moving from Catholicism to Anglicanism, and struggling, with apparent emotion and doubt, with the bigger questions. Which is why I'm struggling with the interpretation of the title of this work. It could just be whimsical and expansive, pointing to a broad and open invitation to all, from anywhere, to stop by and have a chat. It's the intensity of the source that undermines that interpretation for me, though. You can't really miss Donne's subject or general thrust in this sonnet, I mean. I don't want to read too much into the substitution of "From" for "At", though it does make a difference: "At" in the sonnet means a specific place which imaginary beings couldn't possibly be; "From" in the title refers to a distant origin that probably feels far away and somewhat imaginary when you're in the actual present, pausing for a neighborhood chat beside Fire Station #7 in Sunnyslope, Arizona, smelling the bacon and pancakes of the firehouse Sunday brunch going on inside.

I can't help but thinking that above all else Donne was elevating himself by pointing out that the person who wrote Revelation 7:1 "After this I saw four angels standing at the four corners of the earth, holding back the four winds of the earth, that no wind might blow on earth or sea or against any tree," was sadly misinformed of the geometry of our globe. Donne knew better, and we know even better, having seen our blue marble from the photographic perspective of a ship with men on it traveling to the moon. The perspective fostered by the plaque on this gathering place is that the neighborhood is a "safe haven" for people who presumably came from situations in distant places that involved struggle or suffering, including children from 36 countries attending area schools. The thought of kids from danger zones, themselves in transition, studying math and reading, and having a quiet place next to Fire Station #7 to feel welcome, safe, and perhaps to recall some of the pretty animals from home, is uplifting. In laughter, and sunshine, a new beginning. Yes, the trumpets of doom blow. But in this spot, the cactus wren's persistent whirring rack-rack-rack-rack is much louder. I heard him. Sitting in the corner. Get up. Go ride.

Posted by John Romeo Alpha at 6:38 AM