The Burple Bike Gets a Name on the Charles M. Christiansen Trail Seeking Direction, I Saw a Sign
I wanted to take the burple bike back out to a trail today, although I was sandwiched for time. I kicked around the idea of riding the top half of Trail 100, the Charles M. Christiansen trail, deciding just to ride up in that general direction to see what developed. While contemplating the immense compassion demonstrated by merider in her story of trying to revive a neglected Uromastyx lizard named Bip, I saw the plaque above, and thought to myself, "Charles and Bip would want you to rock this trail." I looked ahead, and when I saw this view, below, the choice was made. Even though time was tight. 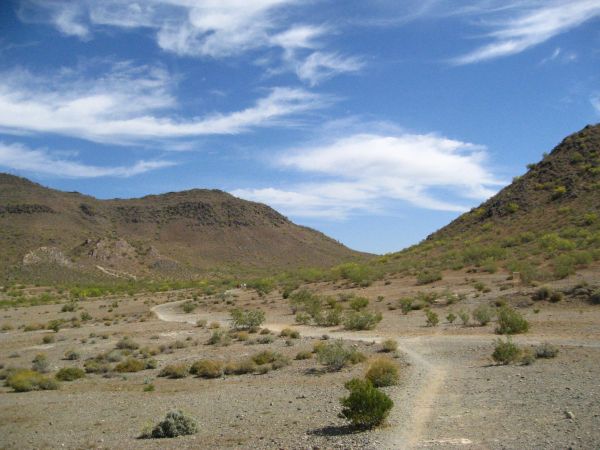 Any Answer Other Than "Ride On": Unacceptable
The trail and weather were excellent. The new purple Oury grips totally lived up to their "Soft, Durable, Stylish" package description. 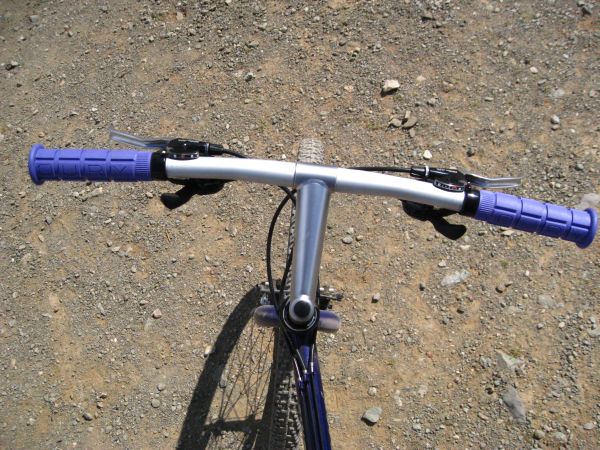 They Go
And that yellow weather strip glue recommended for installing the grips makes them feel like a part of the bars. The bike felt really together on the trail, and except for a few rocky or really rough sections, I did not miss the suspension at all. If I tried to ride this type of trail all day long, I would really miss the suspension, don't get me wrong. On the other hand, some of the longer, smoother downhill-trending sections were pure fun on this bike. However, "burple bike" is not going to work any longer as a name for it. It was only meant to be a provisional label anyway. I stopped just briefly at the tunnel, below, and the name came to me. 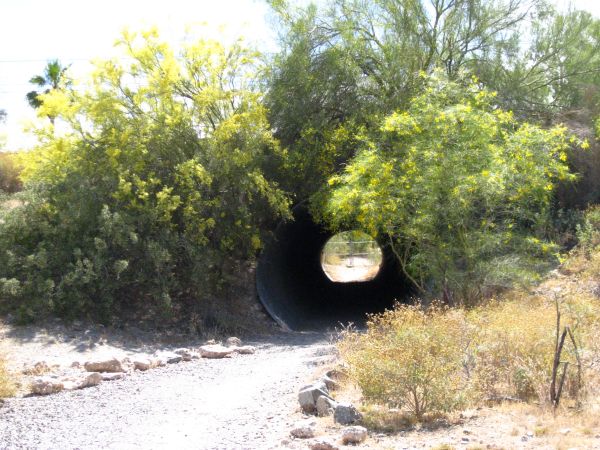 Tunnel Near the Visitor Center
The blue/purple Trek 950 will be called "Bip" from this point forward, in memory of the departed lizard, as well as the compassion shown toward him in his final days. As soon as I christened it,  I noticed I was running out of time. I had to pick it up, or else I was going to be late for my kid's birthday party. I would be a WHERE'S-DADDY. A little while after the tunnel you come to this: 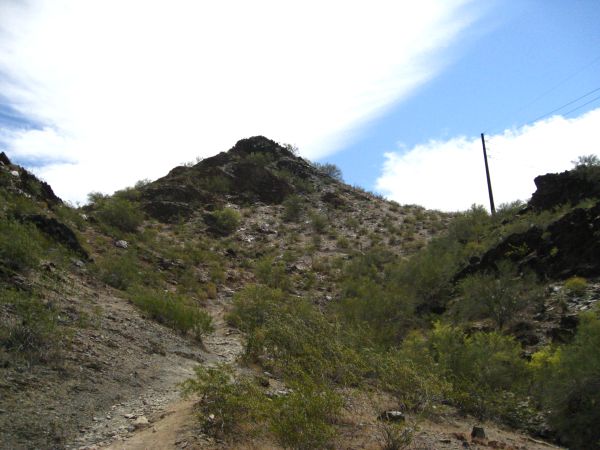 One Steaming Hot Cup of HAB Please
I did hike it up this stretch. I usually do. It gets pretty rough around the corner, up to the base of the electrical pole. And when I got to the top, I checked the time, and realized I had to take the closest bail-out and ride home as fast as I could. It's hard to do that when rider and bike are feeling great and there's trail left to ride,but you gotta do what you gotta do. 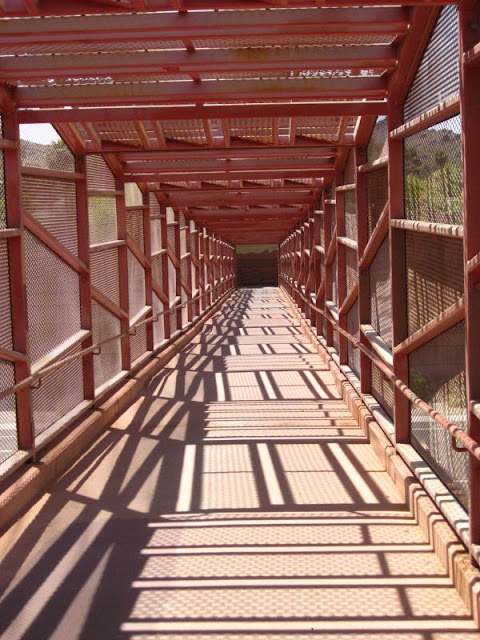 Across the Bridge, Over the 51
I sweat a lot and drank a lot of water out there today, particularly on the fast spin home, which was about as hard as I could go. It was around 90F at the time I was riding. But that's part of acclimatization process, to get used to riding in the heat, so that when it hits 110F I will be able to ride, while consuming large amounts of water.
As I followed along with the story of the lizard on MyDogParty, I really was pulling for the little guy, really hoping that he would make it through, although he sounded pretty far gone. In the end, it turned out that the neglect he suffered was too profound to be reversed even with all the love and care that one little lizard could hope to receive. So, I remember that lizard, his story, and the compassion shown to him by merider, when I call my bike Bip. When we choose to bring animals into our world by capture or birth, to make pets of them, how we treat them ends up speaking volumes about our character, and I think it also reflects on how we treat each other. Sticking a wild animal in a fish tank in a pet store and then neglecting it is abominable, period. When I see a hawk take a lizard in the wild, I don't feel a thing, or maybe I actually feel a little bit of satisfaction that the wild order of things is still turning. But wanton cruelty or neglect toward pets has nothing to do with that. That's human thought and decision-making in action. Humans need to chose better, decide better, than to starve a Uromastyx in a glass tank. We absolutely can go far above and beyond that. Merider tried. Bip the bike will remind me: what we do to the least among us, the ones we captured or bred as pets, speaks volumes about our humanity. Get up. Go ride.
Posted by John Romeo Alpha at 6:29 PM