I Had a Bike in China 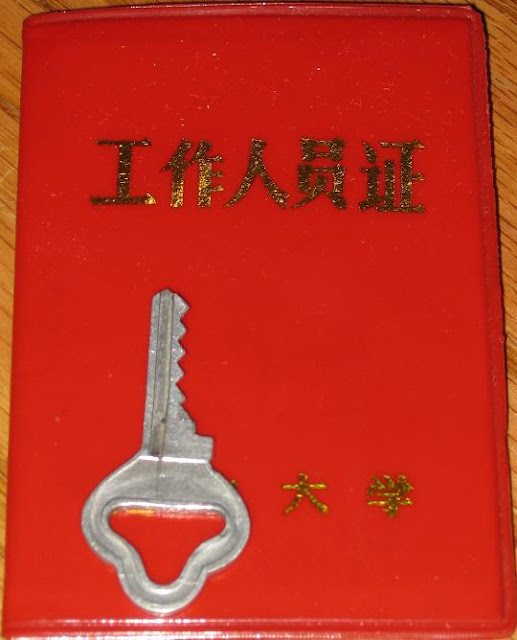 Worker ID Card and Bicycle Key
A long time ago, another lifetime really, I had a bike in China. It was a green Phoenix (Fenghuang) with iffy rod brakes that was made of stout steel and weighed a ton. The rod brakes were so tentative that emergency stops were usually achieved with feet rather than brakes.
I rode it all the time, along with everyone else in the country, in the days before cars took over China's roads. It was so boringly normal to ride a bike everywhere that I don't think I even took a picture of it. What I have left is the key, above, which secured the flimsy rear wheel lock when I dropped it off with the bike warden and paid her the couple of pennies that she collected, rain or shine, summer or frigid north China winter, to allow me to search for a place for my transport among the thousands of other similar bikes. It had no lights on it but that was OK since most of the cars and trucks drove around at night with their lights off, too. I was given various explanations for this, the mostly plausible-sounding were that lights blinded cyclists, or that headlights were expensive and hard to get. But you could ride the city streets at night back then and not see a motor vehicle for long stretches of time. Because car drivers represented a tiny minority.


This was going to be my Chinese New Year post, but I couldn't find the items in the photo last week. So belated Happy Year of the Tiger! Now that I'm cycling in a time and place that I am by definition a fanatic (David Hembrow is correct, as usual), I fondly remember a time and place where it was quite the opposite. In particular I recall my Fenghuang bike and the miles I rode on it, as if it were quite unexceptional to be one cyclist in the midst of hundreds of millions of others.
Sometimes, you don't know what you've got till it's gone. Get up. Go ride.
Posted by John Romeo Alpha at 10:18 AM