Holographic Noise in an Alternate Reality 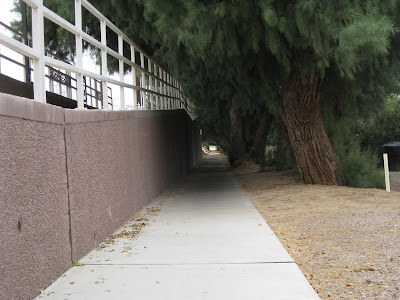 Today I rode to establish the first leg of my three-legged ultimate fantasy: find a route that I could use to commute to Arizona State University in Tempe (leg 1) on my Sinner Mango velomobile (leg 2) where I would perform Internet research and computer scut work for Paul Davies (leg 3).  "Say JR," the premier cosmologist would call to me from the midst of his cosmic wanderings, "Could you compile a dossier on these news stories about holographic noise they have encountered on the GEO 600 experiment for me? Also, check up on what's going on at the LHC today, after you flash that wireless router with some dd-wrt firmware." When Davies says "jump," he would just assume that I would know how high. Well, the photo above illustrates what passes for the express route to Tempe for velocipedes, the Crosscut Canal path. The sidewalk starts from what would presumably be a tortuous or impossible switchback navigation for a Mango (just visible in the left of the photo) after negotiating a crossing of Indian School Road. Once you are on the Crosscut sidewalk, it is an excellent piece of cycling infrastructure. But getting on it from either end is not straightforward. After the tunnel above it looked like a side street might be a more workable feeder for a velomobile. Anyway, 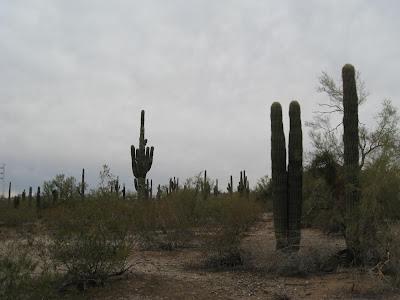 a bit farther along and the path winds past the Desert Botanical Garden, and Papago Park. Since I am in Arizona, I feel compelled to post the occasional photo of a saguaro cactus or two. After a pleasant, if sidewalk expansion joint-rattled, little southerly run, the Crosscut path dumps you out in the middle of the Salt River Project ongoing engineering works project, which I gather has something to do with genetic research related to mashing together the native species of the Colorado, Salt, Gila, Agua Fria, New, and Verde Rivers, the waters of which all come together in this little neighborhood (although the white amur carp and quagga mussels must complicate the research setting). There's a confusing array of signs, construction, and gates, some open, some closed, but after you dump out onto a street, which on the map says "E Campo Alegre Ln" but which I thought said "Marigold St", you find out you were on the wrong side of this, which doesn't bode well for the southern terminus of my fantasy commuter route to my job solving the mysteries of the universe and life on other worlds: 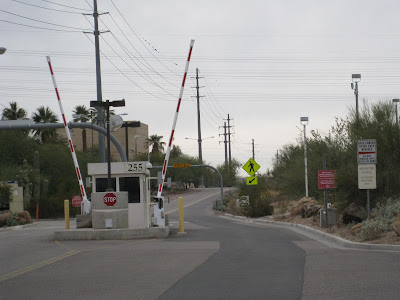 Except for lowering the gates and putting actual guards in the guardhouse, it looks like a fait accompli: before reaching this fortress, you'll have to hang an east a little earlier, and exit the path/park complex on North College Ave. Which is OK, since it has a workable bike lane, too. If you look closely at the signage, you'll see this is not only an entrance to the giant canal mystery works, but also a back entrance to the zoo. QED.

After that, I found myself in Tempe taking pictures of the old grain elevator, only because it is inevitable that they demolish it and erect a giant Hooters/Starbucks/Pizza Hut in its place. Yes I'm still a little bitter about downtown Tempe since Changing Hands books moved out, and Yoko Love stopped playing Long Wongs. 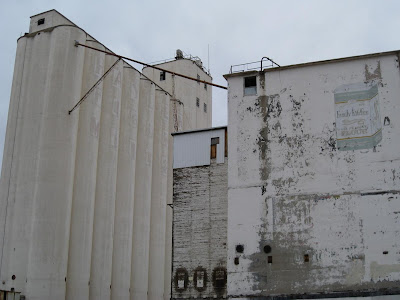 I'm not sure how well the Mango would do with the sidewalk expansion joints all the way to Tempe. Riding that every day might make me long for some sweet miles of rubberized asphalt like they surface the freeways with. That stuff is smooth, and a mixture suitable for cycling and running surfaces would be welcome here. But there is this great tunnel, which makes up for it a little bit (although two Mangos meeting in the middle would not work, I think) 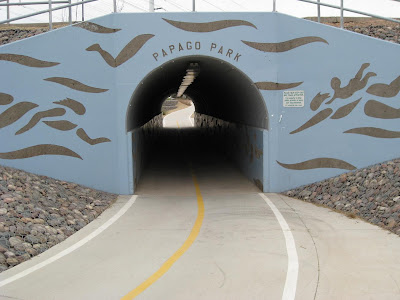 Since my route today took my favorite east-west bike expressway, the Arizona Canal, which is surfaced with gravel, my steel-framed single speed with slightly knobby 700x30 Kenda Kwik tires seemed all around a better choice than a velomobile. I even used it for a little side excursion on the mountain bikey trails of Papago Park, although going downhill is better with a 42x16 than going up. Coming home, at the end of the Crosscut, and while waiting for the light to change to get across Indian School Road again, I noticed that the sign which indicates the place where the Crosscut Canal pours out of the Arizona Canal rather confuses the naming of the latter, possibly to obscure the location of the regional aquatic genetic mixing laboratory complex downstream. But when you consider that this is all just a holographic projection of a two-dimensional surface billions of light years away, what's a little perpendicular mis-signage in the middle of the first leg of an impossible three-legged fantasy? Mmmm, Mango. Get up. Go ride. 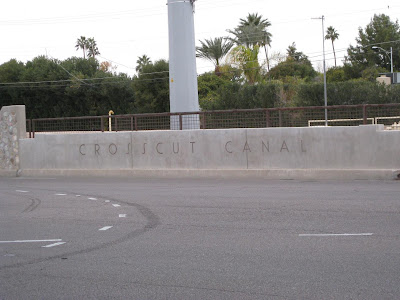