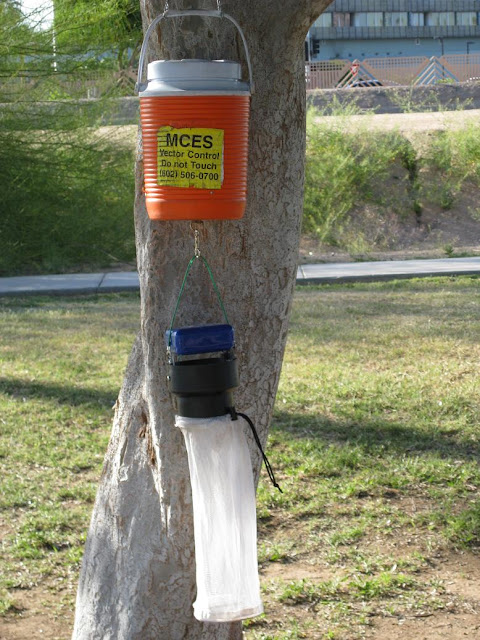 Where Aedes vexans fear to tread
The first time I noticed this object (or rather, one very much like it) hanging in this tree, I was really curious about what it was, and how it worked. In the comments for that post, John was helpful in confirming that it is a flying insect catcher, but catch how? Placed by whom? For what purpose? All it took to unlock the answers were the four little letters on the sign above, and some focused Internet searching. It is an Encephalitis Vector Surveillance (EVS) trap, used to catch mosquitoes in the bag, which is then taken to a lab, analyzed, and the results used to determine what chemicals to use where and when. There's a great, if slightly slow-performing, map, here, which shows where all the traps are placed. Wow that's a lot of traps, spread in a methodical manner you must admit. And there's a sister page to that one which describes the type of beasties being trapped, and what they can carry, here. Those two sites took about four seconds to find, of course, once I had "MCES" to go by, but what the heck is the cooler on the top for? That took a little more hunting, but I determined that the trap is baited with dry ice, which sublimates and releases carbon dioxide, which the little flying disease-carrying blood suckers cannot resist. Then the little blue fan blows them into the bag. Take that, avid buzzing vectors of doom! I snort in your general direction derisively. You have to excuse this little diversion on bug traps. I had to know. Now I do, and can ride in peace. Get up. Go ride.
Posted by John Romeo Alpha at 6:54 PM