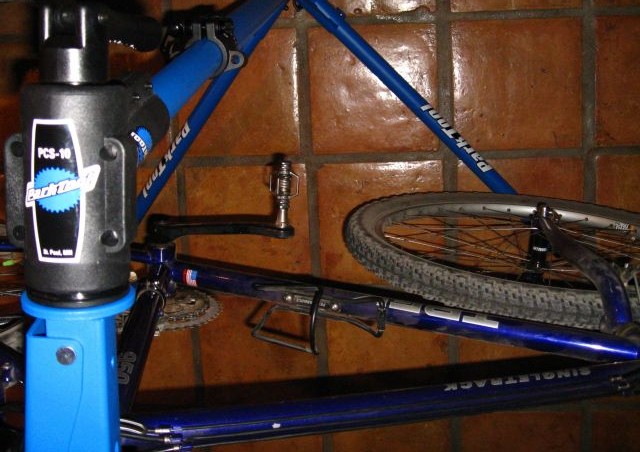 Park Tool PCS-10: Meet the Trek 950
I just bought a Park Tool PCS-10 (PCS-9 + 1) repair stand. I already own a Topeak Prepstand Max, which supports the bike underneath the bottom bracket, which works pretty well, except for bikes with short pedal axles, or with cables that run under the bottom bracket and have a protruding thingy that carries them around the corner. Some of my bikes stand just fine on the Topeak (the Trek, for example), and some don't work at all on it for the above reasons (Yasuko, for example). The Prepstand has held up over time, folds up nicely into its carrying bag, and is pretty light in weight. In comparison, and I didn't really realize the magnitude of this difference between the two until I unpacked the PCS-10, the blue stand from Minnesota is a beefy hunk of steel that appears to have been designed to last forever. And the Park clamp rotates around and holds different sizes and shapes of tubes. It's easy to adjust and use, and holds the bike very securely. I mean, it is rock solid. If I put it outside in tonight's 20mph winds, I would have no concerns about it blowing over. Check out this picture of the hunk of steel at the base: 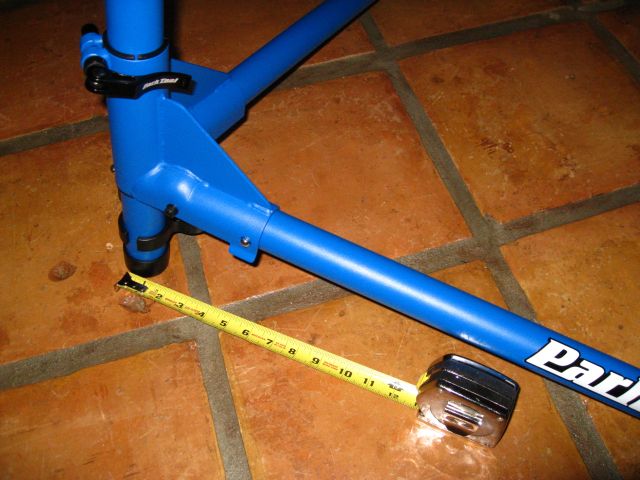 A Stand That Inspires Confidence
It is possible with the Topeak to get the bike into a position such that the stand feels unstable. For example, I learned not to take off the front wheel of the bike when it was mounted in the Prepstand Max without positioning one leg of the tripod under the rear of the bike, else the stand would tip over. Not a huge fault of the stand, really, since it's just a matter of knowing how to use it, and if you needed to carry it a long way, kind of a bonus that it's so light in weight. But since it is so much heavier, the Park Tool stand seems more stable. I may still figure out a way to make it unstable, but on a flat surface under normal use I don't see how. And since I don't plan to carry it very far very often, heavier works. And when I'm done using it, it still folds up into a more compact package that's easy to store. Very happy with the purchase so far. I'll report back in a year or so on it, assuming it lasts that long, and it probably will. Get up. Go ride.
Posted by John Romeo Alpha at 9:24 PM