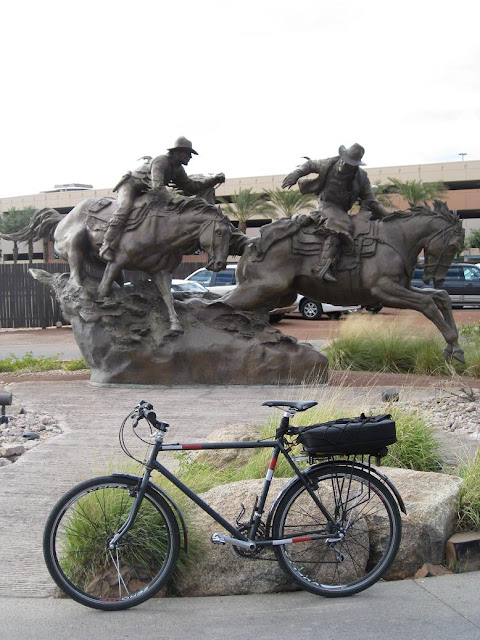 Cargo Drama in the Desert
On the uncommon occasions that I take the laptop home from work, it gets strapped to the rack, as in the photo. I believe at the moment I took the photo, I was thinking of something along the lines of a connectedness between the Pony Express people in the "Passing the Legacy" statue and me commuting by bike with my computer. Mammal-powered cargo carrying or something like that. But, that's kind of a stretch. Then I remembered that the stations were 10 miles apart on average, which means that I commute a little farther each day than a pony in the express usually galloped between stations. They were all about speed and carrying the mail from point A to point B, while I am just out to enjoy the ride. So my analogy would have been pretty stretched out, but then it is a pretty long distance from this location of this monument in Scottsdale, Arizona to the actual route of the Pony Express, which went through Utah and Nevada 1860-61, so some elongation of perspective is perfectly in order. In fact, one commonly used search and mapping engine suggests this novel 729 mile, three day route to ride a bike from this spot to the historic Pony Express route. If you can ride 729 miles in three days on bike, you should be the freaking Pony Express. I don't think I would try to take the computer on that trip. Get up. Go ride.
Posted by John Romeo Alpha at 6:49 PM